On LJ. Wow..never thought it would be this long :)

Yes, it's that time of the year again...when I look at LJ and go, "About time I update the journal.." AND have information to share ;) so here goes...

I had an opportunity to meet (almost) the whole IT team and a bunch of other excellent folks during the Mozilla All-Hands held at the Computer History Museum in Mountain View between the 27-29 April this year. It was great fun and it really helped validate my decision to join them...even if I'll be working remotely. The energy levels are just amazing and I can't wait to get started! :D

In other news, I've also just moved in over this weekend to a nice two bedroom apartment. Most of the unpacking is done, about two boxes to go and a while to settle down I guess. The internet connection is up, so that's super cool.

Time to crash, first day at work (again) in a few hours! :D

PS : Greeting cards sent the good old way, especially when they're from your parents are just super cool!!

After LCA 2009, I boarded Virgin Blue flight DJ707 from HBA to BNE with a bunch of fellow geeks. The flight took off on schedule and thing were fine for about an hour and then we noticed some commotion at the back. Abbie, the lead stewardess was pushing a man to the front and just as he passed by our row of seats, he turned back and cussed at another stewardess who was at the back.

I knew things wouldn't be okay..because the guy seemed pretty arrogant. The put him right at the front of the plane. The German lady next to be suspected that he was a terrorist and we had a little laugh. The captain came out and tried speaking some sense to the guy and he didn't seem to care or understand.

And then the plane banked to the right and I knew we weren't heading to Brisbane anymore. The cabin crew handled the situation very well, and left out the first 3 rows. The rest of the rows were individually informed that the plane was being diverted to Sydney because of the drunk guy in the front and that they didn't want to risk anyone's safety.

I don't think the bloke had a clue were landing in Sydney. It was a lovely time in the evening though, just after sunset. The city lights were on and by sheer luck, the runway we were landing on made sure I could see the Opera House and the Harbour Bridge from the plane. Awesome sights indeed :) The captain never announced the city and the cabin crew just said "We'll be landing shortly" and as soon as we reached the gate, not a single soul stood up ;) The Police came in and the chap left, without offering any resistance (found out later from the news that he did cause some trouble outside the plane). The captain allowed us to use our phones to let people waiting in Brisbane know that we will be delayed.

We took off from Sydney after the Police had taken statements (about 45 mins later) and everyone clapped for the crew. We also got to watch free TV (it's paid otherwise) for the rest of the flight. w00t!

I'd have no second thoughts about flying with Virgin Blue again and hats off to the crew for handling the situation very well.

So that's how I "visited" Sydney for free :) I plan to return someday and actually get out of the plane and go see the place.

I've caught up with a decent number of photos from the trip, Hobart photos : http://is.gd/oq2f

It's been a while since I put down something worthwhile here, so here goes :)

Sometime in early November 2008, I bought myself my first road bike, a Giant OCR3. I began riding quite regularly and slowly increasing the distance over December.

Then I found out that there's a cycling event on February 22nd, and I thought I could take part & signed up for the 40km Challenge and prepared over the first 3 weeks of Feb.

I've uploaded some photos on Flickr and a big round of thanks to my roomie, Isaq for coming along, supporting me and taking the photos :D

On a side note, I'm absolutely in love with Nokia's Sports Tracker. Absolutely kickass and I use it quite regularly. Tracked the race as well, clicky if you're interested.

I'm really starting to love cycling and here's hoping to shave off 20 mins before next year :D

2008 has mostly been a kickass year, in quite a few fronts. Wishing everyone a wonderful 2009 (as I'm rushing off to the Siloso Beach Party @ Sentosa) and seeya all next year! :)

It's been a while since I've written anything here, and decided that this was as good a time and opportunity as any :)

I follow Playstation.Blog on Flickr. Simply because well, all their interesting entries have pics and if there are good pics, I go read up on the corresponding entries. The other day while I was casually going through my emails, the daily one from Flickr with the pics uploaded by friends had Prince of Persia on it.

My reactions were something like : Whoa. Hold on. WTF!!! Prince of Persia??? PS3??? Elika???? WHAT!!! and that obviously led to Your Questions Answered : Prince of Persia and then Prince of Persia Review and obviously I wanted to know when the game was coming here....so off to GameScore and voila! December 5th. Bliss.

Obviously, if you're not one/all of these :

you sort of don't understand the excitement or what the big deal about Prince of Persia is :D

Back in the days, when there was DOS, Prince of Persia was the ONE game (apart from say Dangerous Dave or Transport Tycoon) that was on EVERYONE's lips. If you had a computer and you didn't have/play Prince of Persia, you had to be a loser :D Levels were dissected, strategies discussed, cheatcodes revealed...all to save the lovely Princess from the evil Jaffar. I've played so much PoP (yes, typing the whole name is getting painful now :p) that I still remember the theme song and can hum it all out. Insane? Maybe :D

And then I had relatives egging me along. Cousins and Nieces...just to show them how the Prince wins and saves the Princess...and some of them would even cry if the Prince died. Nuts!

So yeah, Prince of Persia is very much a part of my gaming life and life itself..it's something that I cannot forget and that is why I went rushing to Gamescore after work yesterday to pick up PoP for the PS3 on the day of it's release here. And I was blown away by the graphics right at the first level. The scenery, the desert, hills, canyons, the blue sky...just.simply.WOW. Oh and Elika is surely an added bonus. She helps you along and the Prince himself is an easy-go-lucky chap with a ready wisecrack in hand, all the time! The game is no where near the story of the original...and has a little bit of a learning curve. The fighting is just brilliant in terms of visual representation and graphics. I still remember hitting the ctrl key on the old game...haha. In just about 19 years...we've had SO many changes to computers/display systems/controllers and what not, that the first PoP in 1989 and the current version in 2008 are just eons apart.

Gamespot says you can finish the game in 12 hours, I think I'll take a LOT more :) Just soaking in the various scenes and umm there is real life and work in the middle anyway!

Shameless plugs for Gamespot (I've gotten all my games for the PS3 after reading their reviews and I'm yet to be disappointed....every single one has been spot on!) and Gamescore, who've been an excellent source of everything gaming here, atleast for me. 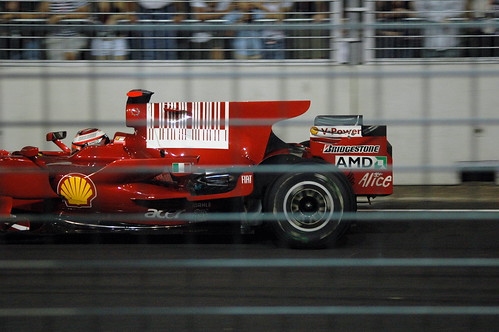 Kimi Raikkonen, Ferrari. And the Sharkfin..., originally uploaded by fox2mike.

The first even night race in Formula1. Wow. A part of history now and I'm glad I could be at the race in person :)

It was great fun walking the track with

teemus on thursday and then Friday, Saturday and Sunday just flew by with loads of F1 and loads more of Zouk.

This was my second F1 race and if I was asked to pick between Sepang and Marina Bay, I think the latter wins hands down. Cheaper food, cheaper merchandise, lovely atmosphere, amazing music, giant screens that were actually viewable to name some. I think the very fact that the race happens in the middle of a city is a win. In Sepang, there was nothing to do after the race, but head back into the city...which wasn't all that much fun in retrospect ;)

I'm sure the organizers will iron out the kinks for the next edition and it will be even more fun overall.

Way to go Singapore, you've given F1 a truly wonderful twist in the tale.