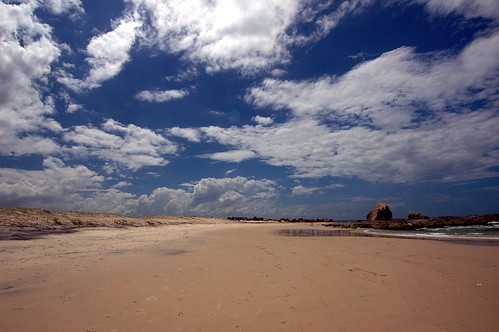 Sometime around December last year, I made up my mind to head to Melbourne for LCA 2008. Since I had a decent amount of vacation time, I decided to make a longer trip and see a bit of Australia.

The longer stopover in Melbourne was due to the Australian Open, followed by LCA.

I flew Emirates from Singapore, since it was amazingly economical :) They had a special offer SIN - BNE and MEL - SIN (booked one way) and I booked my BNE-MEL flight on Virgin Blue.

The flight I took, was doing London - Dubai - Singapore - Brisbane - Auckland and was an hour late when it landed in Singapore. The service in Emirates was on par with Singapore Airlines, I really like their seats as well. The food was okay, and since I hadn't asked for Vegetarian meals when I booked (booboo on my part), they didn't have any. But they did manage to pass on a crew member's meal, that was vegetarian, so that was quite nice of them. I didn't get more than 2 hours of sleep on the 7.5 hour flight, primarily because I was so excited and thanks to the Brazilian couple who were right next to me and were heading to Brisbane to do a 6 month English course and we kept talking about various things.

The plane finally touched down in Brisbane and that's when you're hit by how efficient Singapore is in handling incoming passengers :) It took me a good two hours to leave Brisbane airport after Immigration and Customs heh.

I had a great time in the Gold Coast, mainly thanks to my wonderful host(s), long time friend Tracey and her husband Mike. Managed to visit the Currumbin wildlife sanctuary, couple of beaches, Dreamworld, swim (in the pool and the beach after a long time), watch Cricket (India won the Perth test woohoo!) and Tennis and generally have fun. Special mention and squishes go to Hank, Tracey's Lhasa Apso pup, who was soooo cute and stuck with me the whole time I was there ;) He even slept on me for a night hehe. Puppies rulez!

The first leg ended in Brisbane with a meeting up with fellow Gentoo Dev, Stuart Longland aka Redhatter, Ivan and Appleman123 before heading out on a Virgin Blue flight to Melbourne.

The rest of the photos are in this set.