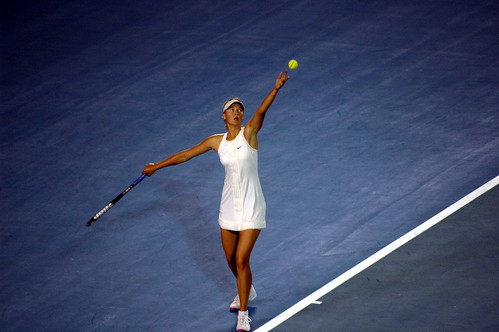 My flight from Brisbane was uneventful. Virgin Blue is pretty cool, you have (small) screens right in front of you to watch what you want and all the good stuff is pay per view :) The rate I guess for movies and channels was something in the range of 7-9 Australian Dollars. I didn't bother, since I was enjoying the lovely skies past sunset and the cities below. The first thing I noticed when I landed in Melbourne was the big notice that warns people against joking (yes you read that right) about bombs in baggage or terrorism. The notice went on to say it's an offence and that people do so will be arrested. Eeeks. Paranoia and more Security Theatre :)

I was supposed to head over to Batman Ave/Melbourne Park early in the morning, but then catching up with cousins and the internet meant I slept at something like 0300 and woke up at 0900. The matches I was interested in weren't going to begin before 1330 anyway! (http://fox2mike.livejournal.com/165792.html)

I took the bus + train and reached Flinders Street Station at about 1315. Rod Laver Arena and the Melbourne Cricket Ground are all a 10 min walk away from there and I decided to walk it instead of wait for a tram. Made it with enough time and managed to get my 70-300mm past security (lenses above 200mm weren't allowed and yes, they were checking but not well enough :p).

Only when I got in...did it really sink in that I was at the Rod Laver Arena. And that I was going to see three Semi-Final matches. Wow. If anyone had told me when I passed out of college that I'd be at the Australian Open in 2008, I'd have laughed at them :p

It was so amazing to watch Maria Sharapova walk out and play some amazing tennis. Really, totally amazing. Jelena was no match and seemed out of form and Maria won in straight sets. I whistled and screamed out "Maria!", "Come on Maria" a few times, I'm sure if there's a recording of the open, my voice will be there :p I was quite loud. She had most of the crowd on her side for this match.

The officials were quite strict about the no walking the aisles during the match rule. Once you go out, you can only enter when the players are changing ends...so you need to think about when you want to go grab that drink, coz you just might end up missing the next 3-4 games. The good thing though is you can eat food inside, which means if you plan well, you don't have to leave when a match is going on.

The second match was Ana Ivanovic Vs Daniela Hantuchova (*wipes drool*) and that was an amazing match as well. It was surely going Hantuchova's way until the crowd decided to chip in an pull up Ana. Shouts of "Hadje Ana!!" kept going out regularly and she rallied back to beat Daniela in three sets. In the 3 ladies matches I watched, Ana had the maximum support. Even greater than Sharapova.

The last match of the day, was the mens Semis. Jo-Wilfred Tsonga Vs Rafael "Rafa" Nadal, and man that was simply stunning. The pace of the men's game is so much higher than women's tennis and especially these two guys were going at it like there was no tomorrow. Serves from Tsonga were regularly above the 210 Kmph mark and were a treat to watch. Tsonga totally outplayed Nadal though and won in straight sets.

On my way back home, I took the train and was waiting for the bus at around 2345 local time at the bus stop. The bus finally came and the driver ends up telling me that this is the second last service of the day and doesn't go where I want to go. He sounded irritated at first, but when I told him it was my first day in Melbourne and that I was a tourist, he eased off and offered to help. He said he'd drop me off at the last stop and that I can take a cab from there. Now the bus had like 4 passengers apart from me and another lady who was going to the same area that I was. And she offered to help. Awesome!

So we get off at the last stop...and I didn't see any cabs around...and I was preparing for a long walk home (because my cousin wasn't picking up her phone, so she couldn't come pick me up hahaha) when the lady from the bus said her husband was coming to pick her up and that she'd drop me home. Wow. Thankfully, I knew the address, so we went to her place first, and got a map and they were kind enough to drop me off right at the doorstep. Random acts of kindness rule. I can't thank them enough for helping out and I thought that's the last time I'd see them, but that was not to be :) More about that in another post.