F1 fever catching up in Singapore 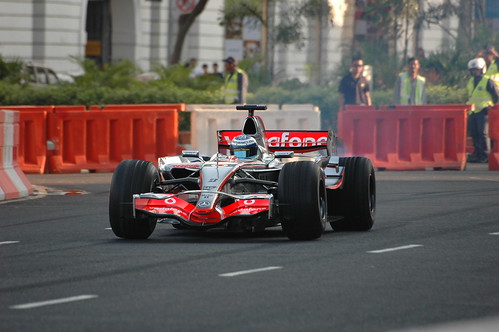 Mika in the MP4-22, originally uploaded by fox2mike.

I was out with some friends yesterday evening when I found out that Mika Hakkinen was in town for a little promo and there was a McLaren F1 car involved in the picture...

On digging around the internet, we found out that it was a promo for Johnnie Walker's new do not drink and drive campaign called Join the Pact (http://jointhepact.com/).

The only thing we (roomie and I) did today was head over to the place where the event was happening and catch a glimpse of the McLaren MP4-22, Mika, Paula Malai Ali and Steve Dawson (covering the event for Star Sports).

Woohoo! I managed to get some pretty decent shots ;)

Of course, the car never did anything more than 2nd or 3rd gear and the ear plugs they handed out weren't really needed, but it was fun. Mika did a total of 4 runs in the MP4-22, with the 3rd and 4th being longer than the first two along with some spins and the like.

The place where the event happened is actually a part of the street circuit where the GP will take place in September. Rest of the snaps - http://www.flickr.com/photos/fox2mike/sets/72157604312769276/